Boy have we been busy! In the last week there have been over 15 different builds to test out different functionalities from finger press events for mobiles to cloud server Javascript functions. Although this means we’re making good progress, there’s still a lot to do.

As with every new project there is a learning curve, and Dev A has been learning a whole lot about Playfab and cloud scripts. Turns out the way we were doing things made us very susceptible to cheaters, and we don’t play that way, no Sir! So to make the user experience fair on everyone and so that the best player wins (rather than the bigger computer nerd), Dev A has been wrapping his head around converting C# to Javascript and Typescript while also learning the API calls and other nuances of Playfab. Wouldn’t wanna be that guy!

From our last proper build to test out functionalities we got a very long list of bugs. Now from that list of over 20 broken features only 2 remain, and rather than bugs they’re more features that we thought would improve quality of life (or play).

Now because of this we’re oh so close to getting another build out to our testers to pull apart all the hard work we’ve done (not bitter…much). 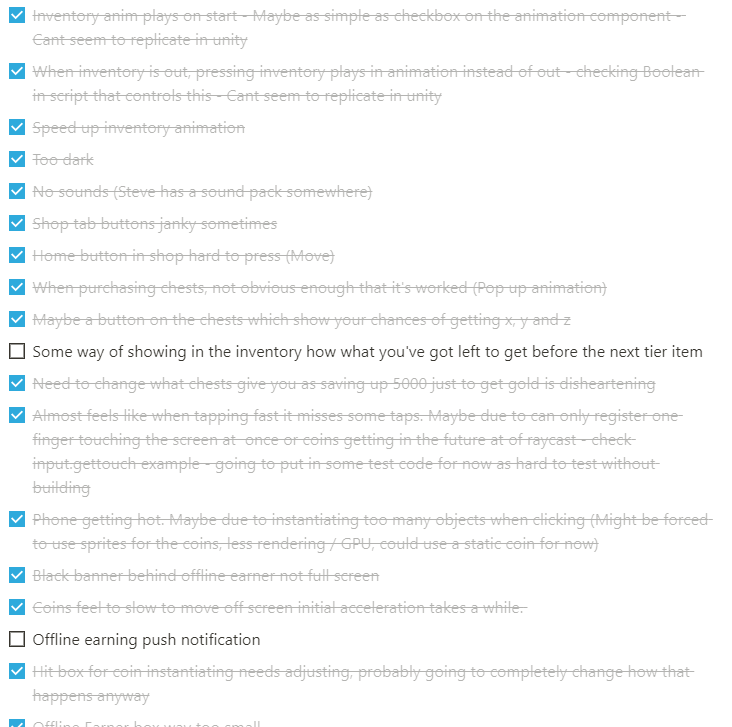 What was I saying?

In the last dev log I said this time I was going to dive into characters, gear and upgrades. After you’ve read through we’d love for you to get in touch on our socials to let us know what you think of this. Because this part of Clicker Kings is still in early development it’s better we catch anything that won’t resonate with the player now rather than later once we’ve sunk many sleepless hours into it.

You first open the game and are met with the majestic music and visuals of Clicker Kings. You’re presented with a choice of character. This will probably be basic to start with, like a viking, samurai, roman warrior etc. Now this isn’t so important as it’s only a skin and down the line we’ll add more interchangeable skins. We toyed with the idea of classes but were worried some people would miss out and get bored if they’d sunk hours into a class only to realise they would’ve preferred another. Anyway…

To start with we’re implementing 5 basic pieces of gear. Helmet, weapon, gloves, boots, chest (this could all change even by the time our testers get their hands on them). These start at tier 1 and as you get more gold/gems and open more chests you get more of the same t1 gear which stacks, then when you have x amount of say tier 1 helmets, they will turn in to tier 2 (probably at a cost to your gold/gems too). Now why would you want to go up the tiers of gear? As higher tiers mean greater perks…

What perks we’re implementing are still currently being brainstormed but they will be along the line of your helmet gives you x clicks per minute, then a tier 2 gives you double that and so on. Then the chestplate makes it so every fifth click acts as a double click, then tier 4 every fourth click is a double and so on…you get the picture!

We’re hoping to get the socials a bit more active and are starting up a discord which you’ll find the link for in the footer of the website.

Once again thanks for reading, from Harry and Steve. Founders of The Night Project and developers of Clicker Kings.

TELL ME MORE ABOUT YOUR PROJECT

We, Steve & Harry, are a duo of engineers striving to push the boundaries of App & Game Development. We work closely with clients on commissions and also develop our own games and apps.